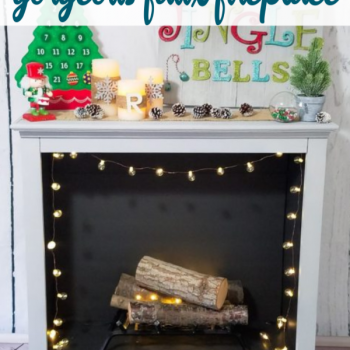 If you love the idea of a fireplace but are not able to install one, check out this awesome upcycle project! Take an old bookshelf and make a faux fireplace! The best part of this is, it can easily be converted back to a bookcase after with our little hack. Perfect if you only want the coziness of a fireplace for the cooler months. This simple and inexpensive bookshelf makeover to faux fireplace will have you drooling. 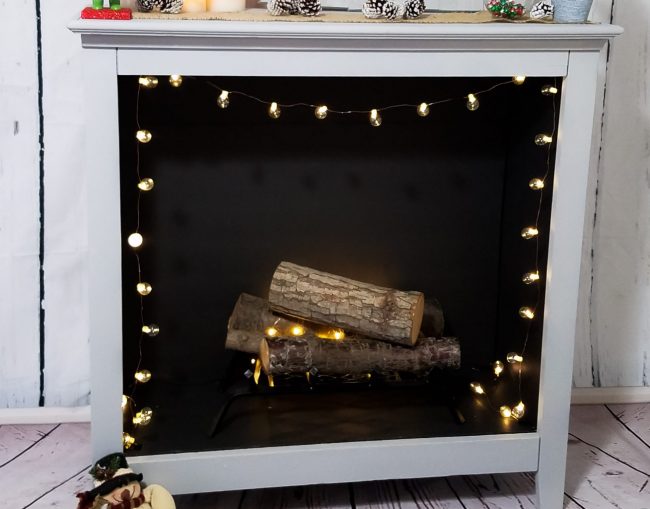 As I was getting our home ready to decorate for Christmas last year, I thought about how I always wish I had a fireplace during the cooler months. I don’t know why but a fireplace just really makes me feel warm and cozy. In fact, I often feel like my home is lacking some sort of holiday spirit when we don’t have a fireplace.

We are currently renting, so putting in a fireplace is not really an option right now. Plus I didn’t want to spend a lot of money on an electric one when we would need the space during the warmer months for other things. I was sitting there, thinking about all of this when I glanced over and saw this… 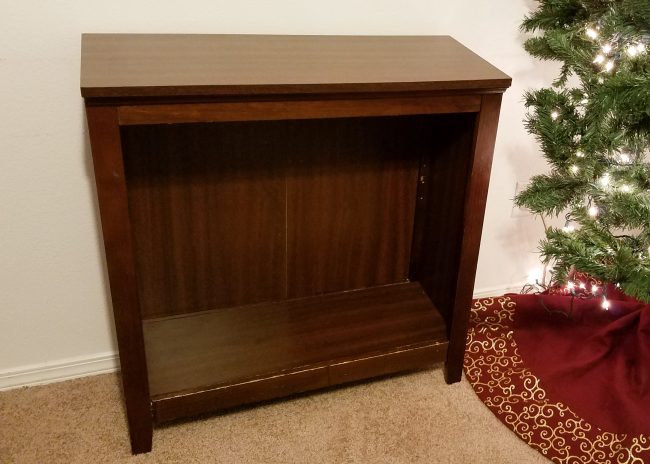 I got this old bookshelf about ten years ago. We had to take the shelf out because the twins learned they could push it up and slam it down (oh joy!) and now it is really used as a place they end up sitting. I have wanted to paint it forever, and that is when it hit me. This would make a great faux fireplace!

Turn A Bookshelf Into A Faux Fireplace

I am one of those people that once I have an idea, I want to get on it and do it fast. It was Friday morning after Thanksgiving when this thought occurred to me, and by Saturday night it was complete. This is defintiely an easy weekend project. 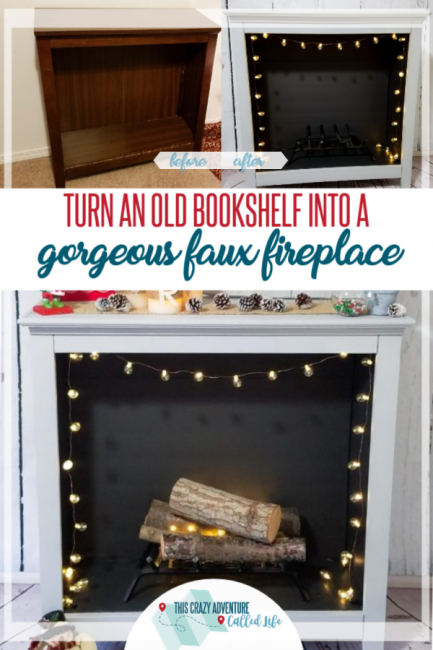 As I looked at the bookcase, I decided that I needed to make the top more “mantle like” so I I headed to Lowe’s and picked up some molding/edging. We cut the pieces with the front edges cut out at a 45 degree angle like you would a picture frame. I then used wood glue and clamps to attach them. We finished securing them with some finishing nails. 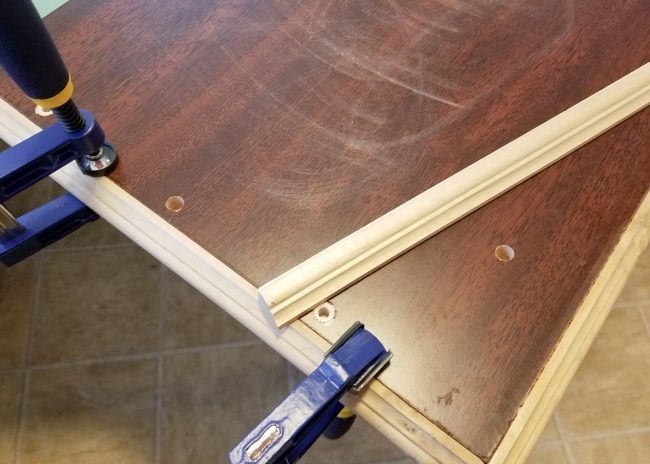 Preparing the bookshelf for painting

One thing about me is I am not a patient person when it comes to my DIYs. That is why I love chalky paint. All I have to do is lightly sand my surfaces to create some texture for the paint to adhere to and then I can paint it. No primer needed. You can see in the picture above where I let my oldest try his hand at sanding before I took over.

After that, I used not only chalky paint, but SPRAY chalky paint! I love this stuff. I have shared it before, but it is by Krylon and works so well. It did take two coats because I chose a light gray color and my bookshelf was so dark, but it dries fast and you can put the next coat on pretty quickly. 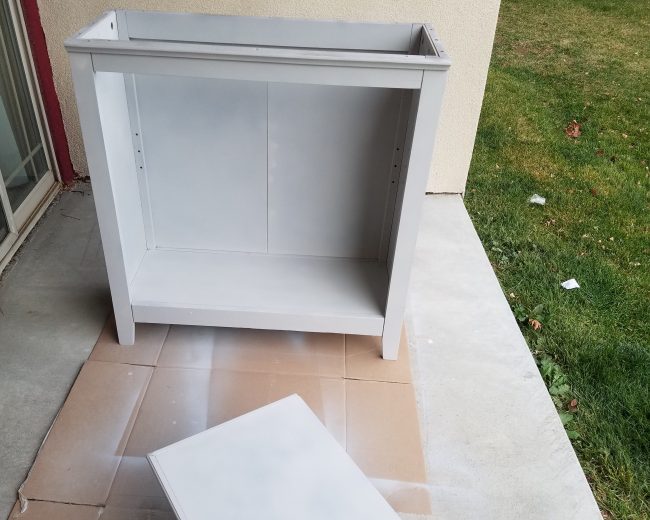 After it was painted and dry, I used the Krylon Chalky Paint Seal (also a spray option) to help seal it in and protect it.

When that was dry we put the top back on the bookshelf.

How To Make Your Bookshelf A Faux Fireplace

Okay, so you are probably thinking…well, so far this is just a painted bookshelf with a prettier edge. Yep. It is. I knew that I wanted that fireplace feeling, but I also knew it may not be realistic for us to always have a fireplace. I may need my bookshelf back. (By the way, I did paint the shelf too.)

So I came up with this easy solution that would make it so I could easily go back and forth from bookshelf to fireplace whenever I wanted. 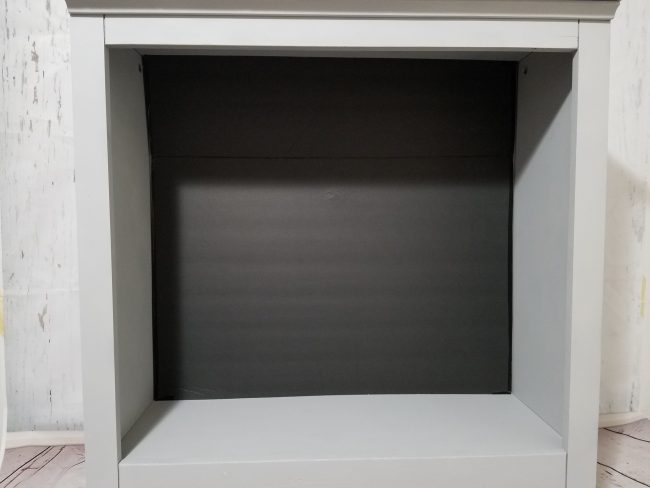 I went to our local dollar store and picked up some of the black foam boards to make a removable insert. The back was large enough that I had to cut a second piece. I used black duct tape to piece the two pieces together. I then also cut pieces for the sides and bottom. The outter edges I used a black permanent marker to color in the white.

So now I have an insert that I can easily remove and turn this back into a bookshelf as I please.

Of course, I didn’t want an empty fireplace. I wanted it to have the cozy feel.

In order to achieve this, I picked up two sets of string lights. Both are battery powered, stay-cool LED lights, and have timers so they will auto turn off after 4 hours.

The first was a set of small globes. I ran these around the edges of the opening, and then put the batter box/control in the middle of the back where it would later be hidden by the fire grate. You can use command strips or hooks to attach them. 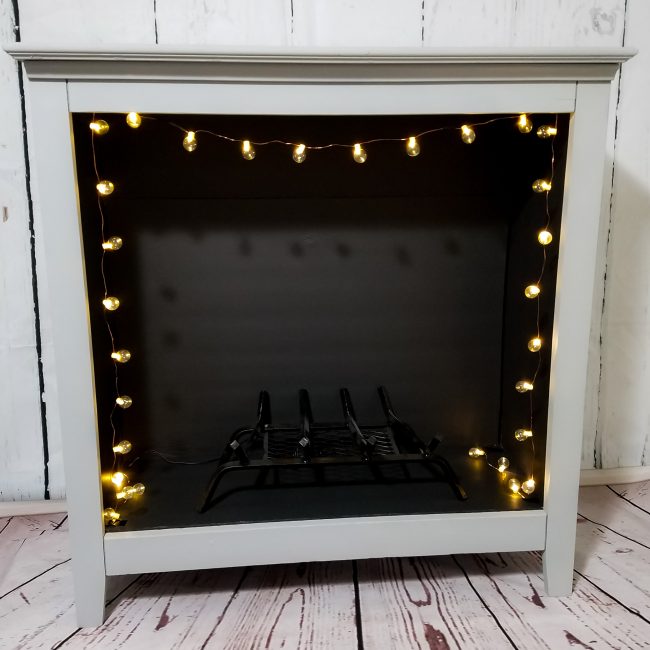 I will show you the second set in a moment, but first let’s talk about the fire grate…

I wanted actual logs in my faux fireplace so I picked up a fire grate. I bought this one that day (black friday) at Lowe’s so I got a great deal, but you could also look for a used one. Be sure to measure both sideways and front to back in your space so you don’t get one that is too big though.

So, I knew I wanted logs. While I would recommend that most people purchase some birch logs (lighter color to contrast the dark foam) I actually knew my dad had some logs I wanted to use. These logs, I learned, are from one of the cherry trees that used to be in our front yard when I was little. I remember climbing the cherry tree and just sitting up there eating cherries. It was pretty fun to know that these logs had come from that tree.

So, back to the second string of lights. They are fairy/twinkle lights on wire. I wanted to use them to create the “fire glow” in the faux fireplace. I tried wrapping it around all of the logs, but it didn’t look right. So instead I wrapped it around the back log, and then around the fire grate. 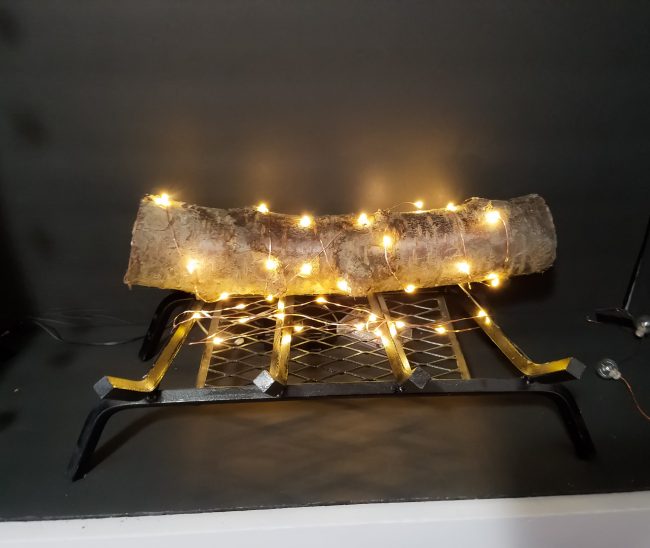 I kept it towards the middle of the grate as I was going to have a bit of an opening between logs to let the light come up there. I also put the power box for this string of lights next to the other (you can see it if you look closely in the picture above).

After that, I added my remaining logs.

Of course, then it was time to decorate the mantle… 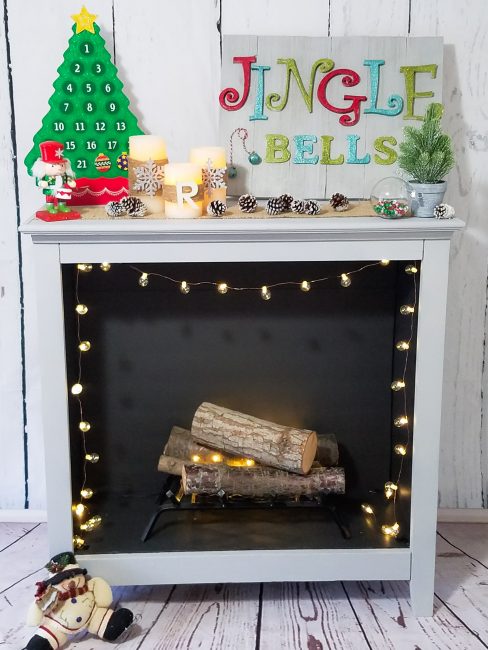 I put my candles on it that I made earlier this year (and can be have the embellishments changed for each season). As well as as our Melissa and Doug Advent Calendar (which I later removed because the kids couldn’t quite reach it. It was still missing something, so I did a second project this weekend and made the Jingle Bells sign (tutorial coming later this week).

I love how it turned out. Will you be trying this project? Let me know how it turns out in the comments.