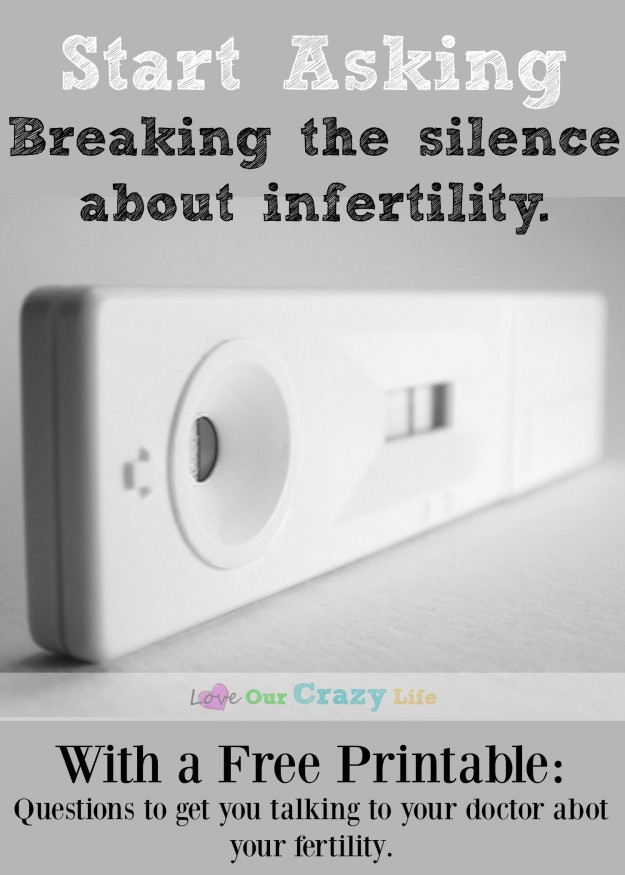 Every year I say I am going to write a post and I am going to share it during this week. This is the 5th April I am blogging and I have said it every year, and never done it. So this year I am sitting down and writing this post to share something very personal with you. I want to share about something I have struggled with. Something that made me feel like I was broken, that tore at my marriage, and then built it up. Something that has helped define who I am today. Today, I want to share with you about my journey with infertility.

This week is National Infertility Awareness Week, and looking back, as someone who struggled to get pregnant with all of my children, I have wanted to write this story for years. I have always been so open about my journey with friends and family, but coming on here, on this blog, where anybody could read about it has scarred me. But this is the year I am going to share, and in doing so, I hope that maybe I can help someone else out there. I am also going to include a free printable for those who are wondering if they are struggling with infertility, or those who are currently fighting infertility. But more on that later.

(I will try and keep this as short and sweet as possible. This was an eight year journey the first time, and a 3 year journey the second time, so please know that I am just barely sharing the tip of the iceberg.)

On our honeymoon, my husband and I decided that we were not going to stop a pregnancy. We weren’t “trying” but we technically were I guess because we weren’t using any sort of birth control. In January, only a few short months after we got married, I found myself missing a cycle. I got a negative pregnancy test. By April, still no cycle, and still negative pregnancy tests. So I went in to the doctor. I was kind of young and naive. I just went to the general practitioner and was told “well, it is probably stress” and I moved on. A few months later, I started gaining weight rapidly, despite the fact that I was working out and eating healthy. I took another pregnancy test, just to make sure- negative. I finally went in to see an OB/Gyn and after a few tests, an ultra sound, and a medical history background, I was told that I had PCOS. Poly-Cystic Ovarian Syndrome. This particular doctor lacked bedside manner and basically told me I needed to lose all the weigh I had gained and maintain a healthy weight for two years in order to hopefully regain fertility. This was 15 years ago, and many doctors were not very knowledgable about PCOS, and this definitely was one of them. I was given no guidance on how to help lose the weight, which is extremely hard for someone with PCOS to do. I was not offered any form of medication to induce a cycle and start on birth control. I was just told “lose the weight.P”

A few months later, too scared to return to the same OB, I self refered to a RE (Reproductive Endocrinologist, aka Fertility Doctor). An RE is an OB and more. This is someone who specializes in fertility. I want to stress this because I have had many friends tell me their doctor does infertility as well, and while there are some amazing OBs out there who can do some stuff for infertility, an RE is a specialist that focuses on fertility, much like a hematologist focuses on blood, or a ENT focuses on your sinuses, etc. 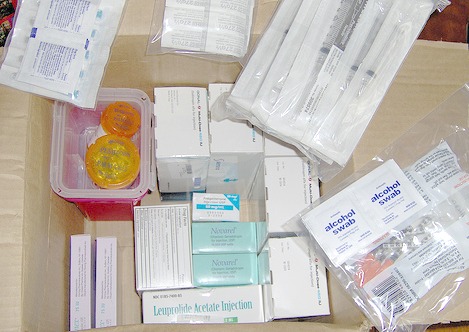 For several years I went to an amazing fertility clinic here in Idaho- Idaho Center for Reproductive Medicine. After 5+ years there, we finally conceived via IVF, only to find out the pregnancy didn’t stick. Later that year, we tried a frozen embryo transfer, and did not get pregnant. The following summer, we decided to give it “one last shot” before looking into adoption. I was sure we would not get pregnant. We used left over drugs from our IVF, but we only did IUI (insemination- or as we call it- the turkey bastor method). It even looked like we were going to have to cancel the cycle because my eggs were not growing when BOOM! Suddenly we had several. I signed a waiver to go ahead with the IUI, even though I had tons of eggs. I secretly hoped for twins so I would not have to go through this again, at least for a while. We did get pregnant, but with just one baby. The Goof was born the next spring.

With the go ahead from my OB, I began trying when the Goof was just 9 months old. When he turned one, we began clomid (a pill form fertility drug), but then I had to have my gal bladder removed right when I would be ovulating. The second month, we were sure the clomid wasn’t working. when my cycle didn’t come, I took a pregnancy test just so I could call my doctor and get a medicine to induce a cycle to try again. Surprisingly, it came out positive. The Goof, our niece, and I were heading out of town, without Mike, in the following weeks to visit friends in Colorado. I ended up miscarrying during that trip. I was heartbroken. But I still felt full of hope since I had conceived so easily. When I still wasn’t pregnant a year later, I had tests done that showed a tube was blocked. While under surgery for my OB to unblock my tube, we also discovered I had endometriosis. If I had only thought to start asking about some of the pain I was having, and the symptoms of my cycles during that time, maybe we would have found out about the endometriosis sooner.

We kept trying with the OB, since we were down to one income, we could not afford fertility treatments this time. Our insurance actually covered them, but they were not contracted with the RE, so we would have to pay up front and get reimbursed. Also during this time, the Goof was diagnosed with ITP (a blood disorder) and spent a lot of time in the hospital. Trying to have more kids kind of took a back seat.

When we were ready to get serious about another kid again, we learned that Mike’s work now offered insurance that was contracted (in-network) with the RE. Not only that but they covered fertility treatments. In the end, we spent only $1000 and we were able to do IVF.

That cycle was hard. The day before my egg retrieval, The Goof landed in the hospital where he would stay for 10 days. Not able to cancel the cycle (I had already had a trigger shot to release all those eggs) I ended up doing both our retrieval and our embryo transfer while he was in the hospital. It was a very stressful time and I was sure it wouldn’t end with a pregnancy, but it did. I ended up having over-stimulation, and when I went in to have fluid drained we saw a little sac…which we would see weekly, until 4 weeks later when a second sac was found. Both with healthy little heartbeats. That was when we found out we would be having twins.

The Goof turned five only months after the twins were born. I never wanted my kids to be spread out this far, but it is how it happened. And I do not know if we will be blessed with more children, but I do know a few things. 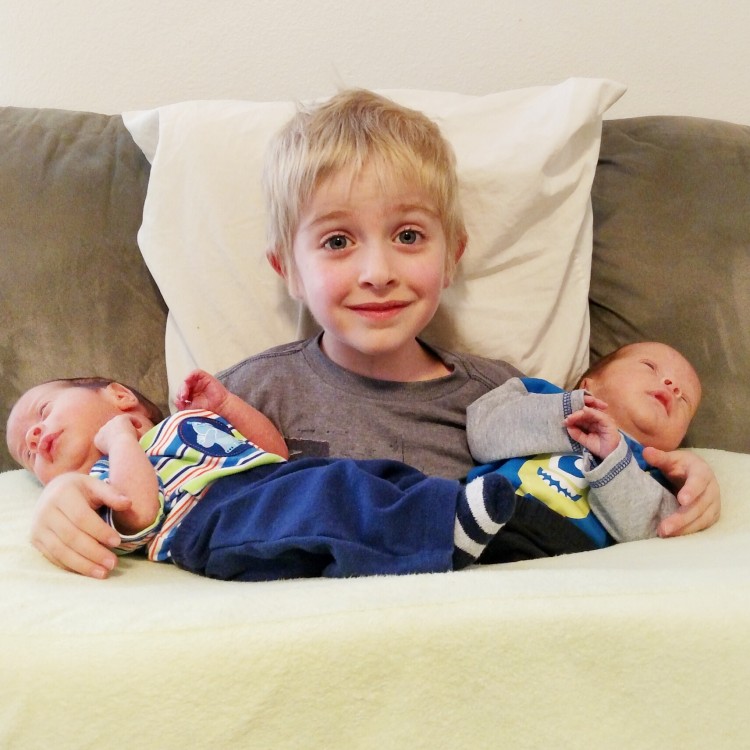 Why am I sharing my story? A lot of reasons. First, I wish that when I had started my journey with infertility it was not so taboo. It was something I felt I couldn’t share. I felt like if people knew, they would think of me as less of a woman, like I was broken. Thankfully, I got past that quickly and became very open about my infertility. Because I was so open I made some amazing friends. Not only that, I encouraged others to start asking. Start asking your doctor about your fertility. Starting asking your partner about their feelings with trying to conceive. Start asking your friends and family for support. Start asking for prayers, for baby dust, for good thoughts. Just start asking!

Looking back, if I had felt comfortable asking all of the questions I should have, things might have gone differently. I am not saying I would have gotten pregnant sooner, but maybe I would have felt  a little more in control or like I was not broken.

This week is National Infertility Awareness Week and this year’s theme is Start Asking. So in the spirit of empowerment, I want you to start asking the questions you need answers to, to start asking for help and support, or start asking those you know who are going through infertility how you can support them.

For those of you who are wondering about infertility, I am including a free printable with questions to start asking yourself, your partner, and your doctors (OB and/or RE). These are just basic questions to help you get the conversation going and to help you when talking to your doctor. There is even room for you to write your own questions you may have.

I asked several women who have been through infertility to help me come up with these questions and I hope you find them helpful.

When I asked in one group for questions, the only response I got was- “My doctor was awesome and I didn’t ask any questions, I just let them tell me everything.” Can I be honest? This response made me sad. I know there are amazing doctors out there, but I hope we all will take the time to ask questions, and not just follow any plan that is given to us blindly. One thing we need to do in order to make infertility less taboo is educate ourselves and others- which means asking questions. So start asking!

(Note: While I encourage open conversation, please also remember to be mindful of others. Some are not ready to share about their infertility journeys, and please, never share that someone else is battling infertility- whether it is your sister, your child, your friend. Let them be the one to share their story with whoever they feel comfortable.)