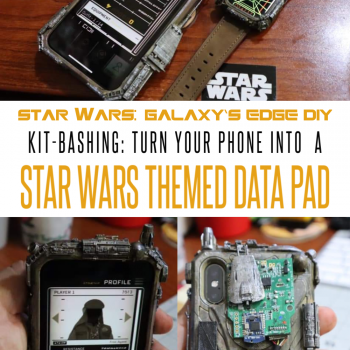 As I gear up for Star Wars: Galaxy’s Edge to open later this week, I have been super active in a few groups dedicated to the new land and all things Galaxy’s Edge. Recently, I noticed a new trend among the truest Jedi within these groups. Everyone started gluing random computer and model kit pieces to their phones. Say what? It is called “Kitbashing” and it is taking the immersion of Galaxy’s Edge to a whole new level!

Your Data Pad for Galaxy’s Edge

In Disneyland’s newest land – Star Wars: Galaxy’s Edge, guests will be part of a completely immersive experience. You are IN Blackspire Outpost on Batuu, not in Disneyland. Children are called younglings and cell phones… well, they are comparable to Data Pads.

Disney has increased this immersion even more with the Play Disney Parks App which will be used in ways never seen before within the land. The app will translate Aurebesh to English, discover hidden items, let you hack into droids and even hear secret transmissions in the land. It is going to be pretty cool, even for the casual Star Wars fan.

The most devout Star Wars Fans put the creative minds to work and found a way to bring the immersion of the land and the Play Disney Parks app even further… by making their phones, and for some even their smart watches, part of the experience in not just the app, but in design.

Since the costume policy for Disneyland still applies at Galaxy’s Edge (no costumes for those over 14) many fans find this to be a way to dig further into the immersive experience. 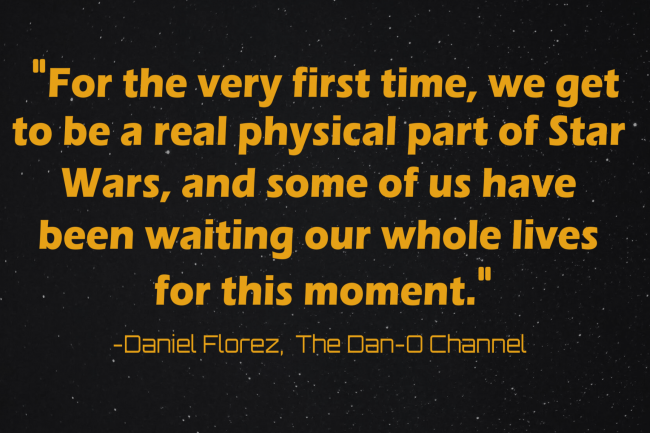 I talked to Daniel Florez to help put together this article and asked him why this has become so popular among fans. I mean, I know it is cool and I want to do it, but this is DIY accessory is EXPLODING in the Star Wars community.

“For the very first time, we get to be a real physical part of Star Wars, and some of us have been waiting our whole lives for this moment. Disney has put soo much detail into this land and many of us fans want to honor that and add add even more detail to our own experiences. Some will be Disney bounding as their favorite characters and some of us have taken things a bit further just to squeeze an extra ounce of immersion out of our experience. Since adults can’t fully dress up due to Disney’s costume policy, kitbashing our phone cases is just another way to dive in a bit deeper while still respecting the rules.” – Daniel Florez, The Dan-O Channel

Kitbashing Your Phone Into A Data Pad for Galaxy’s Edge

Kitbashing is defined as taking model pieces out of commercial kits and creating a custom piece. And that is exactly what these Star Wars fans are doing.

Daniel Florez, an avid Star Wars fan and creator behind The Dan-O Channel, was kind enough to share his photos with everyone. I have to say, this looks really cool, and I wish I had time to do this myself before I fly out to Galaxy’s Edge. (Maybe before I go again with the family though…)

This is a great Star Wars activity for those gearing up to visit Galaxy’s Edge, and can be as simple or complex as you want to make it. Hard-core fans have matched their kitbashed cases to different era of the Star Wars saga, but more casual fans are going with what they can come up with. Either is great.

Supplies and Parts to Kitbash your gear for Star Wars Land 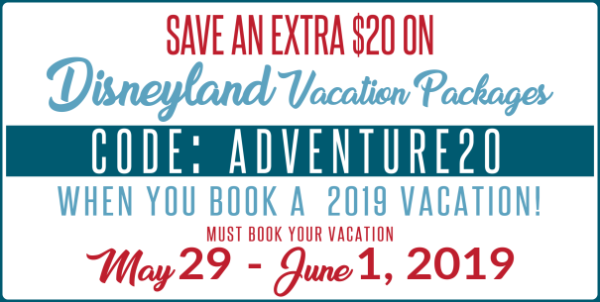 Seriously, you could kitbash with items laying around your house if you are a casual fan, but Daniel shared what he used with me, so I am going to link them below for you.

One of the reasons I asked Daniel if I could share his kitbashing project, over many of the others is because I loved how he did his and the end result. Many of the previous versions I had seen simply glued all the pieces on and then slapped on a bunch of paint. I personally prefer how Daniel painted parts, and left other parts exposed.

Start with gluing on some of your flatter pieces that are meant to just give texture to your case. This is where buying a more rugged case might come in handy. Many often already have grooves and bumps that have great texture.

Once you are happy with how the base of your case looks, you can paint it using a weathering technique to help it look older.

You can do the same thing with your watch case if you are doing one.

Once it dries, you can continue adding more model pieces, wires, and anything else to achieve the look you are going for. Leave it exposed, or paint it some more. It is all up to you,.

Just be sure to leave the openings for cameras, chargers, and headhphones accessible.

This is a great DIY for those heading to Star Wars: Galaxy’s Edge. I think I will do this with my family just for fun before our next trip, even though we are casual Star Wars fans.

A huge thank you to Daniel for helping me with this article. Be sure to check out his YouTube channel and subscribe. He will be sharing more about Star Wars: Galaxy’s Edge there.

If you do this, I would love to see and share photos of your kitbashed data pads and share them here. Send them to [email protected] and use subject line “Kitbash Submission.” Please include how you would like your name to appear in the photo credit.

Book your Disneyland vacation through Get Away Today and save on tickets, get free hotel nights, and more. Use code CrazyAdventure to save even more on qualifying packages.

« How To Go To Disneyland for Cheap Next Year!
10 Things You Must Do In Galaxy’s Edge »