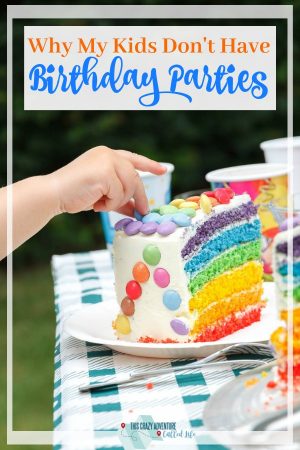 I am not sure if this makes me a bad mom in your book, but my kids don’t get birthday parties. I shouldn’t say that. After all, we make cupcakes or cake, and usually my sisters and my parents stop by. But that is it. We don’t do a big family shindig, or friend parties. And I think I am okay with that. 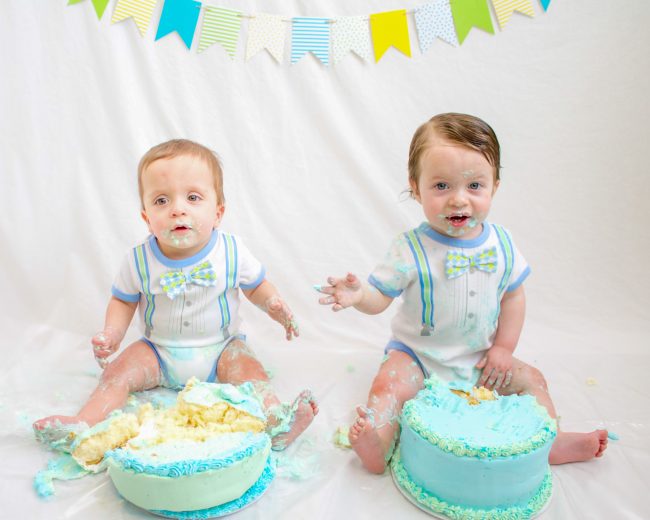 I never started out thinking my kids wouldn’t get birthday parties. In fact, for the Goof’s first birthday, we had a big shindig with family and close family friends. It was a lot of work, even though we kept it low key as a party in the park with home made cake.

Oh, and it was stressful because I had just had surgery to have my gal bladder removed not even a week before. And we were moving a couple weeks later. Yeah, it was stressful but he was our first child after a long battle with infertility. So I did what I thought we were supposed to do…

The next year we did a small family party with my parents and sisters. I made a cake and it was nice.

For his third birthday, we had to go out of town after his birthday…well, we were supposed to. My son was diagnosed with ITP and ended up in the hospital.

For his fourth birthday, we were in Disneyland, but we did follow up with a party with some friends. It was okay, but none of our family friends were his age, so it felt like a waste kind of.

And that was it. We haven’t had a real birthday party since.

Why My Kids Don’t Get Birthday Parties

It has never been intentional that my kids didn’t get birthday parties. Honestly, it felt silly to have them before my son was in grade school. And now, as he is about to turn eight and is in the first grade, we aren’t looking to start.

Growing up, I only got to have birthday parties with friends every other year. My parents had eight kids and I am guessing that was their way of making sure they weren’t breaking the bank on birthday parties. Plus our parties were never as crazy as today’s birthday parties (thanks Pinterest), but nobody’s parties were. So with my kid’s I always thought I would follow the same kind of schedule.

I had every intention of having an 8th birthday party for my oldest…but his birthday is in late May. Do you know how busy people are in late May? Graduation parties, Memorial Day Travels, camping most weekends… Plus he honestly doesn’t have too many close friends.

So instead, we are opting to go on a small vacation. When we get home we may let him invite one close friend to go do something fun like Mini Golf or something. And you know what, I am okay with that decision, and he honestly doesn’t seem to mind.

To be honest, I have read too many horror stories of nobody showing to parties or RSVPs not being made and then every single person showing up, I don’t want to go through that stress, and I don’t want my son to have to go through anything like that.

I have also noticed, my son has had a total of one party invite this year. This could be because he is a little awkward socially (thanks to his cognitive disorders), but I actually think more parents are choosing to skip the parties and keep things simple.

Will My Kids Ever Have Birthday Parties?

With the twins we still have not had a birthday party. I mean, I did Cake Smash pictures when they turned one, and then my parents and sisters who live here came by for cake and ice cream. But no, we have not had a real party for them at all.

We were traveling this year on their third birthday from Seattle to San Diego, so the whole celebration was getting a brownie at Jack In The Box and singing Happy Birthday. That was it. We were planning to celebrate a bit in Disneyland, but other than doing a Character Breakfast, we did nothing special. OOPS!

But they don’t care. They are three. In the coming years, if it becomes important to them, sure we will think about it. But again, they have birthdays that fall right by Spring Break. So planning a party may become a problem with all of their friends heading out of town. It is something we will just wait and see.

As for the Goof, as he gets older and develops stronger friendships, we may very well plan a party, but most likely, we will continue doing fun experiences, as a family first, and then maybe letting him invite a friend or two along.

My Kids Are Fine And So Am I

My kids are fine. They don’t feel deprived for not getting parties. In fact, the Goof knows his birthday is coming up and has not yet even suggested the idea of a party. Instead, he asked if we could go out of town for his birthday, so that is what we will be doing.

He still has friends he gets to play with, and he still gets a few small gifts from family, but other than that, we enjoy time together, he gets to choose what to have for dinner, and we get to cut some stress out of our lives.