2013 was one of the hardest years of my life. Looking back, I still am not sure how I survived. Honestly, at the time it didn’t feel that bad. I think I feel more stressed right now then I did in the moment of 2013, but it was still one of the hardest years I have been through. And Toy Story saved me that year. Yes, that Toy Story. Buzz, Woody, and the whole gang. See, in 2013 my family found out we had a child with ITP. 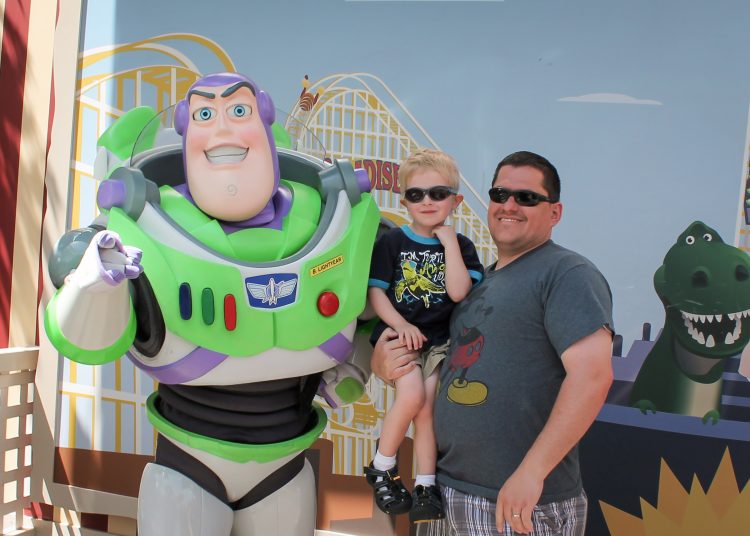 My Son Has A Rare Autoimmune Disease

The Goof has chronic immune thrombocytopenic purpura (ITP). In the simple terms, his body attacks his platelets. Where most people have over 150,000 platelets (most have around 200-300 thousand) in their blood counts, my son had 5,000 when he was diagnosed. But let me back up…

How we learned our child has ITP

Ever since the Goof was ten months old and had been sick with C-Diff (yeah, he gets all the strange illnesses), we noticed he had bruised easily. We honestly thought nothing of it. He was a toddler. He was fair skinned. I am fair skinned and and I bruise pretty easily. We both have very visible surface veins so I was sure that was part of the reason.

It was a few months before his third birthday we started to notice what we now know are strong symptoms of ITP. In February we went to Salt Lake City to visit a friend. Our son was playing in the grass at the hotel, when we went to put him in the car, we noticed a rash of red dots all over his arm. We figured he was allergic to something. We were wrong. It was petechiae (superficial bleeding into the skin that appears as a rash of pinpoint-sized reddish-purple spots).

About a month later, the Goof started having bloody noses that we just couldn’t get to stop. It was now early spring, and we took him to the doctor who thought maybe he had allergies, leading him to pick at a dry, irritated nose. So we put him on allergy meds…but it didn’t stop.

When we finally realized something was really wrong

It was two days after his third birthday when the Goof woke up with what looked like a marker spot in his ear…like inside. It was a bruise. Who bruises in their ear? We were supposed to leave town the next day for a wedding in Salt Lake City, so I kind of thought, okay, we will talk to the doctor when we do his three-year checkup when we get back.

About an hour later I received a call from the pediatrician. They wanted to see if I could get The Goof in that day instead of the next week. Sure.

I almost forgot to mention something to the doctor, but thankfully the nurse asked “is that a marker spot in his ear?” I said “nope, a bruise” and she commented it was weird.

So I remembered to tell the doctor that my son bruises easy. That even though he rarely tripped anymore, his legs were covered in bruises. That his ear was bruised, and that his bloody noses were still happening. He then asked if he had gotten little red dots all over (like the ones we first saw a few months before in Salt Lake) The doctor sent us to get a blood draw.

I was just walking in to get my hair done that evening when my phone rang. It was the pediatrician’s office. When I picked up, I knew it was bad news because it wasn’t the nurse. The doctor had called me himself.

Hearing that your child’s platelets are low, and they aren’t sure why is scary.

The doctor told me I needed to take the Goof to the hospital that night for more testing and a treatment called IVIG. The on call oncologist/hematologist would meet us there. My son’s platelets were at dangerously low levels, and they weren’t sure if it was accute ITP (usually happens after a child is sick), chronic ITP, or worse…lukemia.

I am not going to get all dramatic and string it out (I mean I already told you). Thank heaven above, it was not lukemia. Over the next several years we became friends with many families whose children were diganosed with lukemia and I was constantly reminded that we were blessed that we only had a child with ITP.

How Toy Story Helped Us Cope With A Child With ITP

Okay, so you are probably saying…that really sucks Becca, but what does this have to do with Toy Story?

A child with ITP often times has accute ITP. Meaning they have been sick, which brought their platelets down, and after a round of steroids, they can get the platelets up. That was not the case for the Goof. We tried steroids…nothing. We tried Rituxan. (Which to this day I don’t know if it is a form of chemo or not. The nurses always said they were doing his “chemo” when he got his infusions.) Nothing seemed to work. The only thing that ever helped were double IVIG infusions.

But IVIG infusions only raised his platelets for a week or two. And they came with a price. The Goof would get extreme migraines that morphine didn’t even help, and nausea. Because of his extreme reactions, his IVIG treatments meant 3-4 days in the hospital each time he had one. And he had a lot that first year.

Toy Story Got Us Through Those Long Hospital Stays

When your child with ITP is hooked up to an IV, and you are just waiting for the migrains and nausea to start, you don’t really want to go to the hospital play room. At three years old, his attention span to crafts was only so long. So what did we do?

Well, the Goof was in his Buzz Lightyear phase. So we watched Toy Story Marathons. Except he liked to watch them in the order of #3, #1 and then #2. Not sure why. And it kind of always bugged me, but I always let him watch them in that order. Then the next day, if he felt up to it, we would watch again. Sometimes I would insist on watching them in order at this point.

Either way, by the end of that first year, I had all three Toy Story movies memorized. And at the time, I was sick of them. I banned watching them at home. They became our hospital movies. But truth be told, when my child with ITP had his first hospital stay where he didn’t request Toy Story, I was sad.

See Toy Story had become my coping tool. It was a certainty for me. And while number 3 always had me in tears, realizing one day my child who I was with day and night in the hospital, holding him and singing gently too him through his migraines when they hit, would be gone, I came to rely on those movies to give us some normalcy in a year that had us so full of uncertanty.

The following year we began an immono suppressant treatment. It didn’t work for a while. Then in the summer, the Goof caught a summer cold. A summer cold that turned into much worse, and put him in the hospital for ten days. He actually landed in the hospital the day before my egg retrieval for the IVF cycle that gave us the twins. He was so sick he was sleeping about 23 hours a day. I was there with him, except during my egg retrieval (which couldn’t be canceled) and embryo transfer.

While he slept, I found myself asking the staff to put on the Toy Story movies. While my son slept, and I tried not to stress over his condition, because I was in the middle of an IVF cycle, I found comfort in those movies. I think I probably did a Toy Story Marathon every day we were there.

Something happened after that illness. The Goof’s platelets went up. Not to normal levels. We definitely still have a child with ITP. But they went up high enough that we did not need to give him IVIG treatments anymore. He even was cleared to ride a bike.

He only had one more IVIG treatment after that, to prep for surgery to have his tonsils removed. Since I had 6 month old twins at the time, my husband stayed in the hospital with him until surgery day. I don’t know if they had a Toy Story marathon, but if not, that is okay. I think it had become more my thing than his at this point.

And that was it. Thankfully, we haven’t had a hospital stay since.

This month, Toy Story Land is opening at Walt Disney World. I was so excited when I learned I might have a chance to attend the media event for the opening. Sadly, my poor husband has been battling some weird health issues (that they don’t have any answers to) for the last six months. Things didn’t work out for me to go. But I am excited to watch all my fellow blogger enjoy the event. I know one day I will take my oldest son there, and I will probably bawl like a baby.

Since I am not able to make it to Toy Story Land, I am heading out on a girls trip to Disneyland to check out Pixar Fest, where we will see the Incredibles (another family favorite) and my beloved Toy Story Pals in the park. And I will probably cry… a lot.

If you want to follow the opening of Toy Story Land, follow my friend Patty from My No Guilt Life on Instagram because I am sure she will have some awesome posts/stories.